Showing posts from December, 2011
Show all

Flying on the Airbus A310 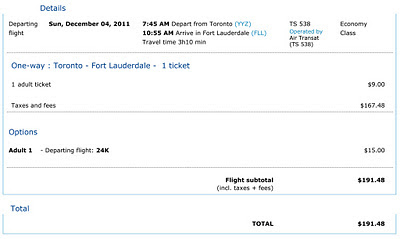 --> The Airbus A310 is a twin-engine medium to long range wide-body aircraft built in the 1980s and 1990s as a shortened version of Airbus’ first aircraft, the A300.  Throughout years of service with world’s major airlines, such as Lufthansa, Singapore, and Pan Am, I never got to fly in an A310.  As time progressed, the 255 A310s built slowly transitioned to secondary airlines, cargo carriers, and various Air Forces around the world.  Short of sending myself in a FedEx package, or flying on an exotic airline such as Ariana Afghan, Biman Bangladesh, or MIAT Mongolian (see full list of current A310 operators), there was one last easy way for me to log an A310: an airline in Canada called Air Transat was still operating an 11-strong fleet of A310s.  With Air Transat retiring these ‘buses in 2013, I had to start looking at flying it soon.